« Respect for nature and man through clean work » 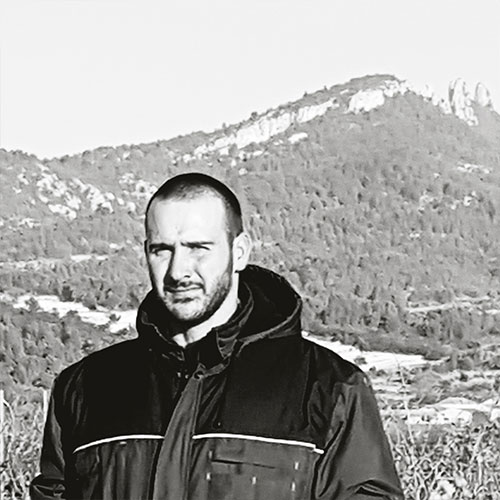 In 2015, after completing a BTSA in viticulture and oenology and a few years of training in various fields, notably at the Leccia estate in Corsica, I decided to take over an old cellar dating from 1958 which belonged to my uncle Louis at the time. I start with half a hectare of vines in AOP Vacqueyras. In 2018, I took over 2.5 hectares of vines in AOC Vacqueyras which would allow me to officially settle down as a young farmer on January 1st 2019. In 2019, the estate grew again with 3 hectares of AOP Côtes du Rhône and 1 hectare of Vin de Pays de Vaucluse.

The Vacqueyras PDO vines are located on the plateau of the garrigues between Vacqueyras and Sarrians on a stony clay and limestone soil. The average age of the vines is 45 years. The grape varieties present are Grenache noir, Mourvèdre noir and Syrah. The Côtes du Rhône and the Vins de Pays are located in the foothills of the Ouvèze. There are old Carignans, Grenache and Ugnis Blancs.

The estate is run using organic farming techniques with one part in conversion and the other certified. The wines are made with respect for the terroir and vinified and matured in concrete vats. My flagship cuvée is the red “LOUIS H” Vacqueyras in honour of my uncle Louis Hugues who built the winery in 1958.