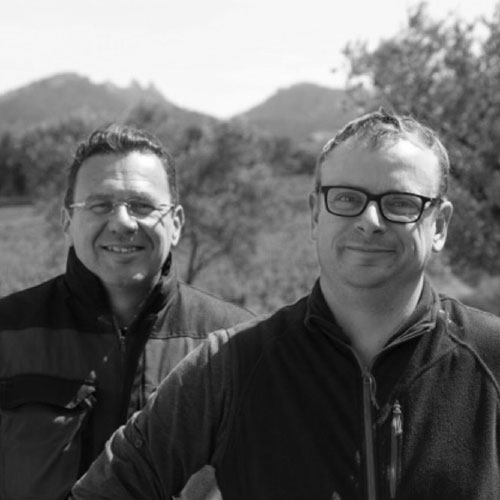 At Clos des Cazaux, the winemaking tradition has been carried on from father to son since the great grandfather Gabriel Archimbaud produced the domaine’s first bottle in 1959. Now, it’s the turn of his great grandson Jean-Michel, who has been tending the vines for 30 years already, and Frédéric, the oenologist in charge of the cellar, to carry on this tradition.

The estate is divided into two parts: 25 hectares encircling the building, situated on the rare sandy-clay slopes of the Vacqueyras appellation and 15 hectares in the middle of the magnificent limestone massif of the Dentelles de Montmirail in Gigondas.

At the estate, the well-being of the vines remains an obsession. As a result, the average age of the vineyard is half a century.

In the cellar, nothing is left to chance either. Grapes are sorted and then vinified traditionally without crushing, by terroir and by grape variety, in order to best respect the maturity of each one. This allows us to offer you real elegant and full-bodied wines of character.